“When you change the way you view birth, the way you birth will change”. ~  Marie Mongan, the founder of HypnoBirthing® 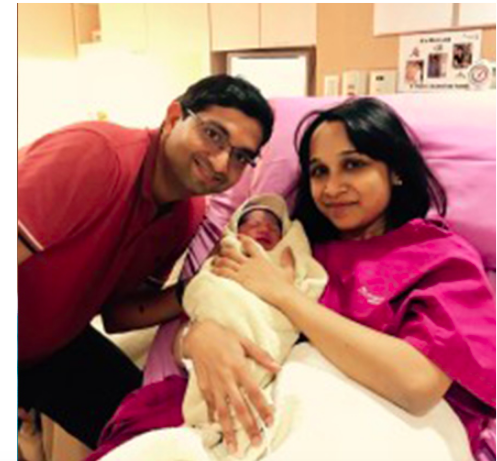 My story starts 4 years ago when I gave birth to my first child. Even though I had been adamant about having a natural birth, I was ill-prepared for and, to some extent, ill-informed about what happens during labor and birth. I had only attended hospital labor prep classes, which focused on breathing techniques, using your spouse for support and also gave a detailed list of pain relief medication available for labor. It was a sterile, scientific class, meant to equip parents with sensible information rather than for the emotional experience that is birth.

In my 35 weeks, I was tested Group-B Streptococcus positive and did not know that this condition could be reversed. I assumed that I had been ‘born’ that way and had resigned myself to antibiotics during delivery. Nothing went as planned for my first child. My water broke before contractions began and I rushed to the hospital, thinking it was necessary. I was strapped on monitors and spent 12 hours pretty much lying on a bed in mild pain, waiting for the contractions to really start. Then my baby’s heartbeat dipped a couple of times and my doctor recommended a C-section to save the baby from distress, and I, exhausted and confused, complied.

For my second pregnancy, I decided I would do all the necessary research well before so that I could be prepared. When I found out I was pregnant I immediately jumped on my laptop to do some research on whether it was possible to have a natural delivery after a C-section. All the articles and blogs I found were encouraging and I discovered the term VBAC, Vaginal Birth After C-section. I was so excited that there was actually a term for this and was reassured that this was something I could definitely attempt!

The next step was finding a doctor who would be supportive of VBAC. I read that there were only a handful of doctors in Singapore, who were 100% supportive of no intervention, natural births and fewer who were ok with VBACs, because of complications associated with it. After reading several blogs, I found Dr. Paul Tseng at TLC Clinic at Thomson Medical, who was highly recommended by women who had had natural or VBAC births, for his hands-off, laid-back approach. I immediately scheduled an appointment with him and went over to his clinic the next day.

His calm and cool approach was evident from the start. He listened to my story about my first birth with a smile, agreed immediately to support a VBAC, since I was not a high-risk candidate, and shooed me out of his office when he realised I was just 5 weeks along. “Why are you here so early? Come back when you’re eight weeks pregnant!”, he chided me. I realised this was the doctor for me – someone who was not flustered and who didn’t handle his patients with kid gloves.

Now that I had a doctor, I had to equip myself for the emotional experience of birth. Although I had gone through one birth, I realised I knew almost nothing about how it worked and what to expect. In my research, I stumbled across the term ‘HypnoBirthing’, which I found extremely intriguing. When I read up about it, I was drawn by the focus on treating birth as a natural and beautiful experience, where you welcome your baby into the world with calm breaths rather than making it a scream fest.

I contacted Yen, who came over and met with my husband and myself. After listening to her stories, we were confident that she was the one we wanted to work with as my doula and also developed more faith in HypnoBirthing itself. Over the next few months, my husband and I attended classes with Yen and practised the breathing techniques at home. We hope that this time I was prepared to deal with whatever my baby had in store for me.

Early morning, the day after week 38, my uterine seal/mucous plug dislodged and I had birth show. My surges started soon after-not too intense and quite widely spaced. I alerted my husband, and, as discussed with Yen, did not immediately head to the hospital. Instead, I started Calm Breathing and recorded the surge timings. That whole day was spent with surges around 20-30 mins apart. Every person I spoke to encouraged me to go into the hospital and get admitted, but I stayed focused on my breathing and refused to go in and get strapped again. As night fell, the surges started getting more intense and regular and by 5 am, they were around 10-12 mins apart. Yen came over in the morning to help with some relaxation and stretching and left around 11 am since my surges were not yet close enough.

By 12:30 pm, however, the surges became really intense and were spaced just 5 minutes apart! Yen rushed back to our place and together we headed to the hospital. When they did the first check, I was already 4 cm opened and the surges were quite intense. I had never experienced anything like it. Yen and my husband reminded me of the breathing techniques and I tried my best to focus through the surges.

I NEVER ONCE THOUGHT OF ASKING FOR PAIN MEDICATION

The most surprising part, which struck me much later, was that I did not ONCE think of asking for any pain medication. It was like my brain had blocked that out as an option completely. It did not once cross my mind! I really think that it thanks to all the HypnoBirthing techniques we used to remind us that birth could be natural and beautiful, and what we experienced was not pain as much as discomfort that can be borne. I really hypnotised myself into believing that pain medicines were not needed.

Within 2 hours, I had a terrible urge to bear down. Like I wanted to pass motion. But Yen told me that it was probably the baby on its way out. I was stunned- I had not expected everything to move so quickly! She requested the nurse to check me again and we were all taken aback to learn that I was already 9 cm along. The nurses scrambled to get my doctor into the room. Unfortunately, Dr. Paul was on vacation that day! After all my careful planning, I was disappointed that he would not be present for delivery. But he sent his back-up, Dr. Pamela Tan who was also extremely warm and supportive of my wishes for no interventions.

At 4:26 pm, roughly 4 hours after my labour commenced, I welcomed my son into the world, naturally and without any interventions. It was the most amazing, rewarding, incomparable experience of my life. All the discomfort was forgotten in an instant when they placed the baby on my chest.

HOW HYPNOBIRTHING HELPED ME:

I learned a lot during the sessions with Yen, and not just about breathing. The sessions:

IF YOU’RE THINKING OF A VBAC

Archana Ram successfully achieved not only a vaginal birth after cesarean but a total drugged-free birth. What does that mean? This was the best birthday gift for her baby and for herself. Please share what you learn from Archana on Facebook or give her a Facebook Like.​