Julia and Andrew, first time parents wanted natural birth from the beginning of their pregnancy. But baby turned out to be in breech position around 35 weeks when her doctor suggested a cesarean birth as an option. She was devastated.  Find out how she managed to birth 4.1kg baby and a 37cm head circumference “big head” baby? 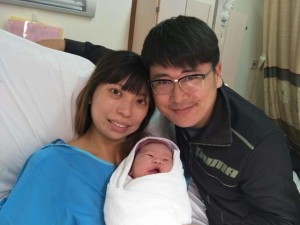 Hi, I am Julia, first-time mother. I wanted to have a natural birth from the start of my pregnancy. Everything was going quite smoothly for the initial first two trimesters in my pregnancy until about 35 weeks my gynae informed me that my baby was actually in breech position and I had to consider the option of a caesarean birth. I was devastated by the news because I very much wanted a natural birth if possible. I asked around and I was recommended to Yen. Yen came to help me at week 36. She taught me a few positions where I can practice at home to try to turn the baby head down.  We did that everyday a few rounds a day. We went back to the gynae at 37 weeks, baby actually turned head down so we were very happy. That was the first challenged that we had to overcome in the third trimester.

The second challenge we had to overcome was that my gynae was telling me that my baby was big and the head was big so better that he be induced so that baby could be born earlier and baby’s head won’t be so big. I wasn’t prepared to be induced because we went through the HypnoBirthing course and we learned that with induction there was also a possibility of complication if it wasn’t successfully induced and that could lead to emergency caesarean. I was more inclined to wait.

Fortunately, my gynae was willing to wait till 41 weeks. However by 40 weeks, baby still was not showing signs of coming out. So, Doctor suggested inducing at 41 weeks. So we agreed. But between that one week before the induction week. I again tried my best to induce naturally. I again approached Yen for natural inducement ways possible from drinking raspberry leaf tea, to eating eggplant parmesan to evening primrose oil.

Finally, I resorted to a foot massage on the last 2nd or 3rd day before the induction day. By then there were still no signs of labour. I was well OK I would just go for the induction the next day. Surprisingly when I was admitted to the hospital they found out that I was already 4cm opened and therefore I didn’t need to be induced initially. The doctor allowed me to wait and I walk around with Yen’s advice, moving around and some other movements. It helped with the dilation but surges were not fast enough, not strong enough. We were admitted at 8 am so by about 6 pm we agreed to the gynae’s suggestion to help with the process.

After that, when surges came along I also put into practice the HypnoBirthing breathing method. What I felt in the birthing process, it’s not exactly pain but discomfort like a severe menstrual cramps. I just breathe through the surges. It helped. It wasn’t unmanageable. It was manageable! To a certain extend when I was fully dilated, I didn’t feel 10cm dilated. I was told to push. I was asking them “are you sure? I don’t think I am ready but OK I will just push if you ask me to.” And the baby was born in 30 minutes.

It was quite amazing because I didn’t expect I could do it without pain relief at all, and my baby was 4.1kg. It was a surprise, from the ultrasound scan just one week before that he was just estimation 3.5kg maybe, at most 3.8kg. But when he was born he was 4.1kg. So it was actually possible. It was a pleasant birth process for me. I felt a sense of achievement. Although I did have the drip at the end of the day, it was partially natural because I didn’t need the first part of the pill as induction labour.

Yen asked, “How does Andrew feel?”

It was something new to him as has to act as a birth companion. He has to do the admin stuff. Also, the room was very cold so he helped to tell the nurse to bring up the room temperature. He was really acting like a birth companion for me. It was really useful as he helped to provide support for me the mother when I went through the surges. During the pushing process, he was there to help and support my neck and also counting 1 2 3. I think it was a good experience for him.

Watch her video sharing her journey how she managed to overcome her challenge after challenge to achieve the birth that she and her husband wanted.

No comments to show.